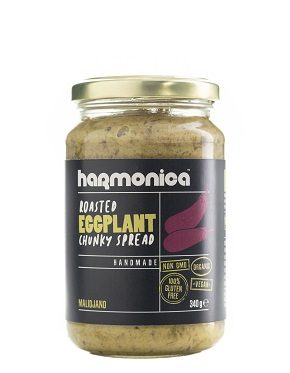 Malidjano only sounds Italian. Even though it derives its name from “melanzane”, the Italian word for eggplant, its actual origins are on the other side of the Adriatic Sea. The Balkan dish is widely spread in Macedonia, but just like it goes with many other traditional recipes from the region, every national cuisine has its own version of it.

Some add cheese and garlic to it, others – nuts or even mustard, but the base always remains the same – eggplant and peppers. You can think of malidjano as the green ajvar, as it’s quite often called because of its color and similar content to that of the ajvar.

We follow the same rules as we do with the rest of our products - we wait for nature to show us the perfect time for collecting the vegetables. We leave the eggplants and red peppers to grow naturally and we pick them at the right moment when they’re ripe and succulent. That makes their taste and aroma even richer after roasting. Growing and gathering vegetables this way allows us to produce a thick malidzhano, only with natural ingredients and no redundant additives. We puree the vegetables and season them with himalayan salt, organic unrefined cane sugar and organic wine vinegar.

If you ask us, malidjano is so flavorful and delicious that you can go for it straight out of the jar at any time of the day. If you want to combine it with something, you can spread it over a toast or add it to a sandwich. You can mix it with cheese, walnuts or cut olives. Malidjano is the perfect appetizer and can be a great choice on the side or even shine as an independent dish.

Skillfully seasoned only with natural ingredients.

No preservatives, thickeners or colorants.

Looking for a solution

Get news by email