For years, we’ve been looking for farmers to work with for goat milk products, farmers who share our values. Instead, they found us. Gergana and Pavel, from the village of Mirkovo under Baba Peak at the foot of Stara Planina Mountain, started looking after goats 25 years ago when their son Georgi was born.

“Еverything started with Georgi, shortly after he was born – says Gergana – because the goat milk is the most similar to human mom’s milk. We got two goats, then five-ten more, and we just kept growing.”

Gergana and Georgi decided to start looking after their goats in an organic way about five years ago. They went through a transition period of two years and since then their milk has been coming to our dairy farm where we turn it into our delicious goat cheese harmonica.

When they started their transition to organic, they called us and come to our dairy farm in Malo Buchino. This is where they were strongly encouraged by our Meto and Venko and that really gave them the moral boost they needed to bravely enter the world of organic farming. They rented fields and pastures which are now close to 250 acres big. They take care of their pastures on their own using organic farming methods. They also make the hey for the winter themselves, so they can be sure the goats are fed high quality food.

The goats are a native breed, and several are Anglo-Nubian. The farmers intent is to have all Anglo-Nubian goats in the future. Nubics are known for crooked muzzles – long ears and Roman noses, but they are healthier and with higher milk yields. 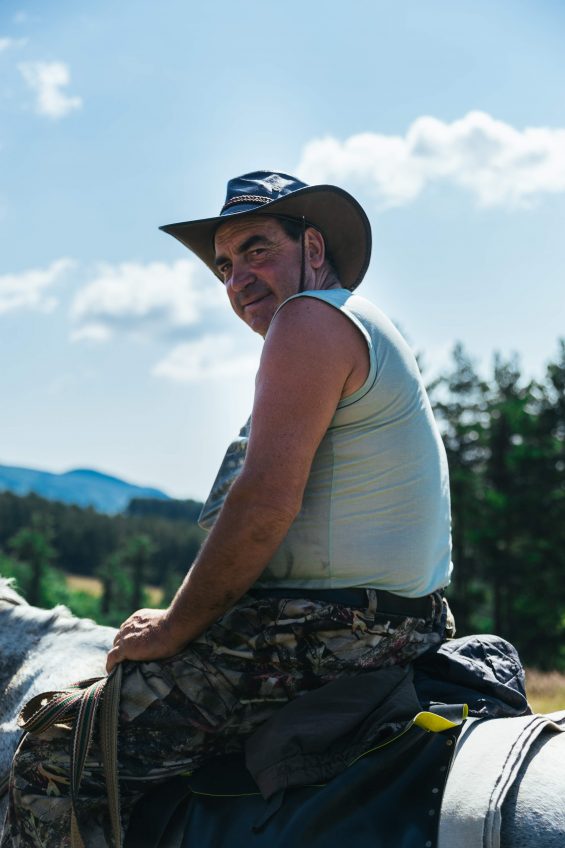 As we stroll through the pastures of the farm together with Gergana and Georgi, accompanied by the pleasant sound of the goat bells, Pavel appears, riding his horse Zar. He was coming back from helping a few curious goats who left the herd and almost got lost.  Being a shepherd means total deveotion – all day every day. Without a horse to help him move around the fields, it would be impossible for him to cope with his tasks, because the goats are tireless. The exception is the short hours at noon when the goats are resting in the shade.

“Farming is very responsible and it’s a serious business. That’s why we’ve chosen to do it ourselves, we don’t count on anyone else to look after our goats,” Gergana explains. “If you’re not part of the process daily, you can’t be sure if everything is well taken care of.” So there are only four of us working on the farm – my brother also helps. Many fellow breeders complain that they cannot find a serious shepherd. Most are using electric fencing, but the goats are not the kind of animal that can stand in one place, they are vertigo and they do not stop. The sheep are much calmer.”

Another big helper in the farm is the dog Mima, but she can’t be relied on as a shepherd at the moment, because she is a new mom herself and the care for her puppies is a priority over the goats at the moment. A few days earlier, a goat was stranded in the forest and eaten by wolves. The problem becomes even greater in the autumn, when goats climb high in the mountains, where wolves are even more numerous.

“The only way to deal with the wolves is with a rifle, but even then it’s very difficult,” says Georgi. “Besides wolves, there are many jackals here. And in recent years – many bears.”

Unlike cows that give milk all year long, goats only give milk from late April to early November. The milk has a different flavor and density during the different months depending on the pasture. The cheese also changes its qualities according to the season. When the junks ripen and the mushrooms come out, the milk is a little rarer. As the grass begins to dominate the menu, it becomes thicker. And when they go up to the higher parts of the Balkans in the fall, when the pasture is close to its end, the milk becomes very thick, and there’s a fresh aroma of pine and juniper in the milk. And the cheese made from the autumn milk is richer in fat. 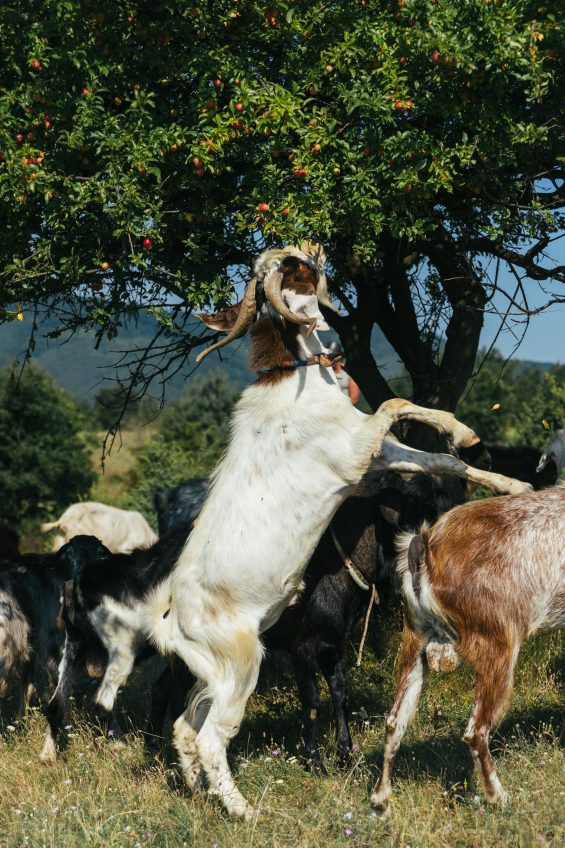 Goats love the green leaves up in the tree branches.

The goats stay overnight in the mountain range under Baba Peak until the first snow falls, then they return to the farm near the village.

Goats are milked by hand. Milking is done twice daily and it takes about an hour each – depending on the season and the amount of milk. The milking process has its subtleties – it requires experience and attention.

“The goat is not a machine – you fuel it and it’s ready – it is a living organism,” says Georgi. – The most milk-full month is in May, then the quantity begins to decrease.”

Weather also has a great influence on milk production. In rainy weather the milk is less, in very hot weather it is also falling.

“People say that when goats are in mating season, their milk starts to smell, but this is a myth and has nothing to do with the truth,” Georgi explains. “And everyone has a different taste. We are probably too used to the taste of the goat milk, we’ve had it for 20 years. But if there’s ever bad flavor in the goat’s milk it is always solely because of poor hygiene in some farms” – the young man says.

“A goat is not like a sheep – eating everything edible,” explains George. “She picks the purest food. Cows and sheep eat everything while the goat is like deer and other wild animals – it chooses only the most fragile flowers. For example, these noodles – they will not eat them – will pass the dried ones, and will pick only the softest ones that have just started to come out. They like the green leaves from the branches of the trees.”

Not all goats have bells, but only the leaders of the herd that others follow. Animals often quarrel, fighting for supremacy. Especially when the mating season begins. The males are 15 in number and, apart from the primary sexual characteristics, can be recognized by the beautiful fur necklaces that they wear on their necks.

The wonderful impressions of the Mirkovo farm complement the exceptional mountain and valley views, reminiscent of postcards. The Kom – Emine route passes just above the pastures. The village is often visited by tourists because it is the starting point for Chavdar and Murgana huts, and we recommend goat walks as therapy. The fresh air, the constant movement and the therapeutic symphony of bells in the meadows are truly wonderful.

And until the next visit to the goat meadows, every bite of goat cheese harmonica will remind us of a symphony of hundreds of bells, breathtaking sights and aromas of sweet summer.

And until the next visit to the goat meadows, every bite of goat cheese harmonica will remind us of a symphony of hundreds of bells, breathtaking sights and aromas of sweet summer.

Get news by email